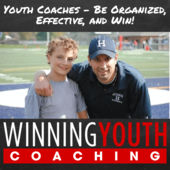 Movement Solutions was just interviewed on the Podcast “Winning Youth Coach.” Check out the interview here:

Here is some information about the podcast creator:

I am a passionate youth sports coach, a husband, a father of three, and a believer that coaches can change the self-esteem and future of the young people we coach. I started this site to share coaching successes and learnings with other parent coaches who share this passion of the impact, responsibility, and fun of positive coaching. I have coached dozens of youth sports teams over the past 10 years- including football, basketball, and lacrosse. I am also a student of coaching – attending seminars, online learning, and completion of an 18-week coaching class at the University of Akron taught by Jim Tressel and Jim Dennison, with guest speakers from many different sports at the college and professional level

Here is our intro from the podcast:

Dr. Steve Grosserode and Dr. Jared Vagy were collegiate athletes and soccer players. Both suffered injuries that affected their ability to play and led to the pain of lifelong injury. Determined to figure out why injuries happen and how to prevent them lead both to pursue our Doctorates in Physical Therapy from the University of Southern California, the #1 ranked program in the country. It was at USC that they began to understand how to prevent injury. After nine years of study, the singular reason for continued injury became clear; misaligned movement. Through many years of research and practice, they consolidated there plan into a three step process. The three step system popularized and they began teaching seminars internationally to soccer coaches on how to prevent injury. They soon realized that we needed to spread the word to as many players, coaches and parents as possible. They knew that if they could stop injuries from occurring, they would be able to change the course of a player’s career and life. They now have written ebooks and have an online academy to share what they have learned, much of which we will discuss in this episode.